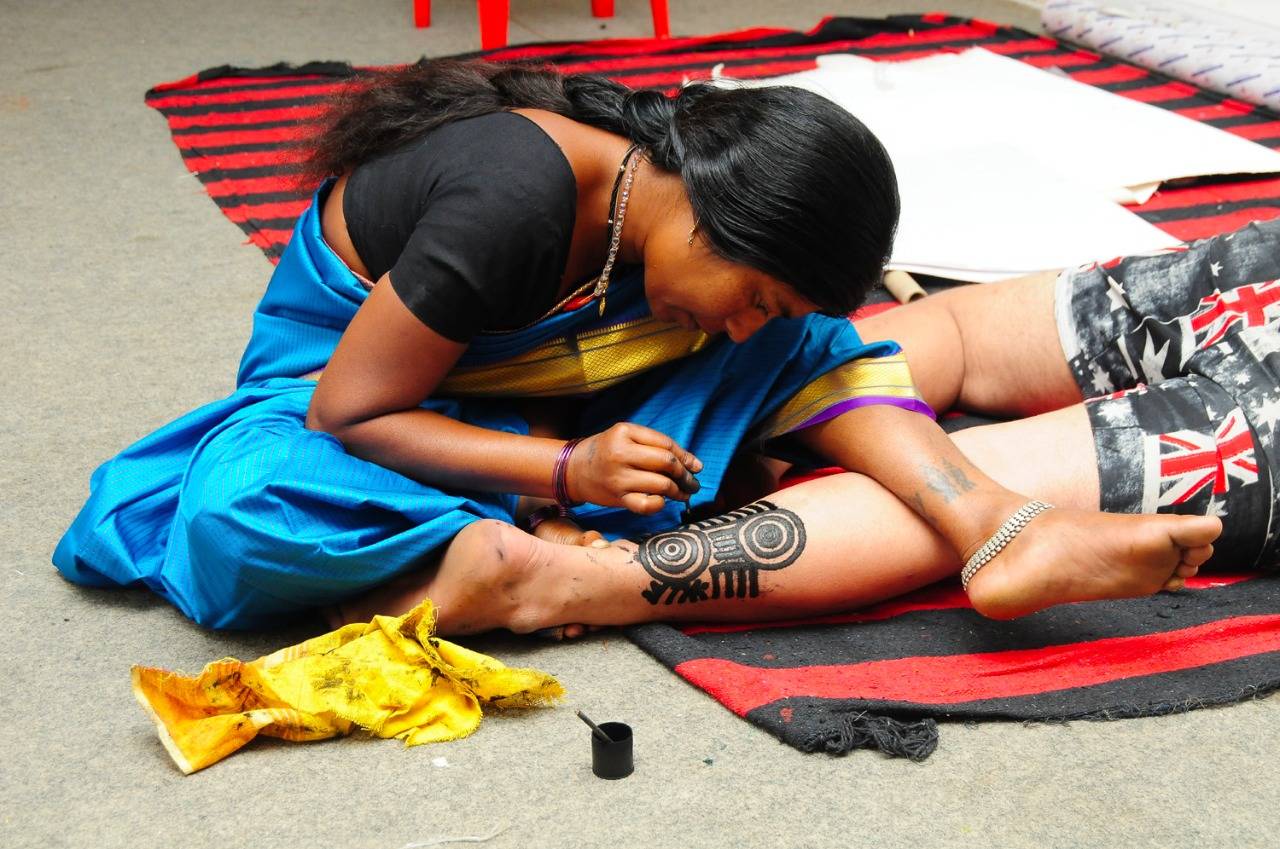 Recently a group of locals from Bastar in Chhattisgarh has set up ‘Godna Tattoo art shop at tourist spots of tribal region with an objective of reviving age-old art form, which tribes believe is the only ornament that remains with them even after they are deceased.

This primitive artistry is known for traditional designs like the bow and arrow and bison horn headgear, is waning in the fast-changing world as people are more attracted towards the modern tattoo designs.

Taking concern for the tribal community, Bastar Academy of Dance, Art and Language (BADAL) had also organised 15-day training on Godna and modern tattoo art some months which was joined by nearly 20 young locals including some school going kids.

After training, most of them have started working as tattoo artists and set up stalls in places of tourist importance in and around Jagdalpur, the headquarters of the Maoist-hit district, located around 300 km from the state capital Raipur.

Some local youth, mostly tribals, are now trying to give a leg up to the Godna art by promoting it among tourists, telling them about its significance and drawing the traditional designs with a modern twist while also ensuring safety, hygiene and use of good quality ink and other equipment.

A catalogue of the traditional Godna patterns and stories behind them is also being prepared to conserve this art form, a prominent tattoo artist from the state told PTI. 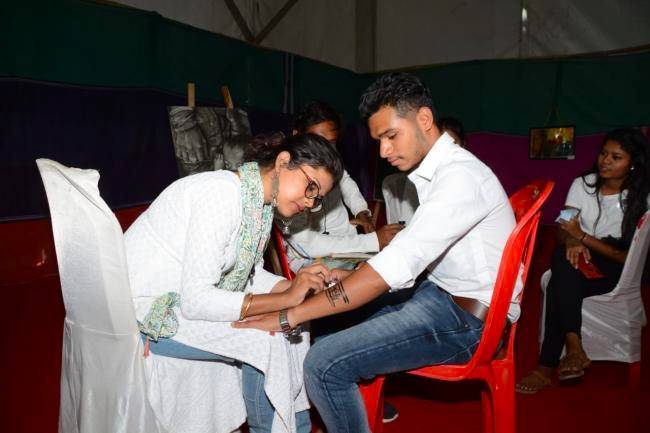 One of the participants, Jyoti travels for about 45 km every day by bus to reach Jagdalpur from her village to learn the arform. She is also pursuing a Bachelor of Science course through correspondence from a government college in nearby Tokapal town.

“Earlier, most of the tribal women had Godna tattoos on their bodies and tribal men also preferred it.each design has a particular significance. It is believed some designs keep evil powers and illnesses away, while some say it is the only ornament which remains with people even after death. My mother also has a Godna tattoo on her face below the lips and forehead,” she said.

One can still find traditional Godna makers in the haat-bazaar (weekly market) and fairs in Bastar, but the art is gradually losing its popularity, Jyoti said.

Another local Sandip Baghel (24) and four other youth have set up a small tattoo-making stall opposite the renowned Chitrakote waterfall, a popular spot among tourists throughout the year. Baghel has been interested in art and drawing since childhood,he never imagined he could be a tattoo artist before attending the training session. 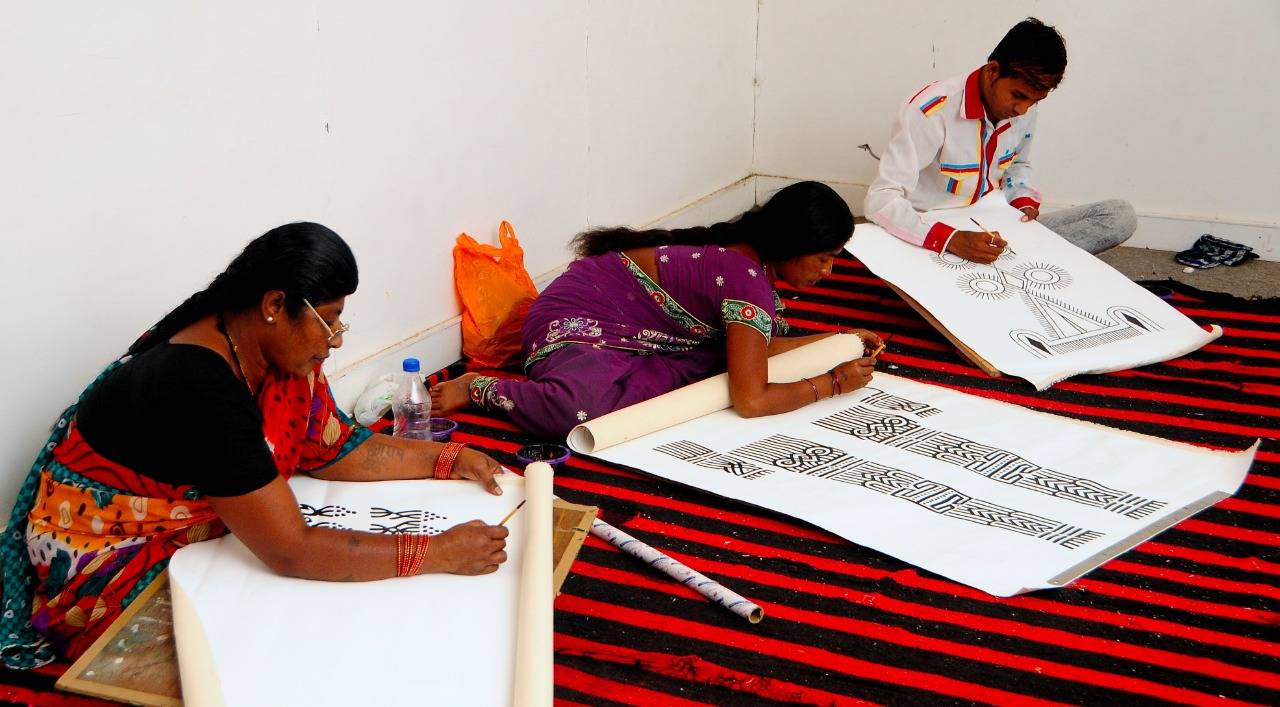 At first, tourists are reluctant in getting inked with a traditional tribal design, but after telling  them about its significance they agree to it. They also make trending designs, but  convince people to go for the old and traditional motifs having cultural significance.

Raipur-based tattoo artist Shailendra Shrivastav has trained many young artists, he informed that the previous Bastar collector Rajat Bansal had conceptualised the idea of the training programme, aimed at preserving the rich Godna art, also known as Godni, Bana and Bani, by giving it a modern twist hence making it a means of livelihood for locals.

According to him, most of the  tattoo designs are from  African and Egyptian tribes online, but not of the Bastar region as it does not get promoted. I was initially apprehensive about how these artists would learn the Godna art in 15 days, but they started showing significant improvement in just one week,” said Shrivastav.

The unhygienic way of using single needle for several people was the chief reason of declining Godna tattoo art form besides the tattoo-making was also a painful process and would sometimes cause side-effects.On his suggestion, the district administration provided good quality tattoo-making equipment and US-made herbal inks free of cost to all the 20 artists.