At first only six women were rigorously trained in the crafts, presently 38 women are weaving the mats on traditional looms around the Deepor Beel, a Ramsar protected water body. It takes approximately 2 kilos of dried water hyacinth to weave a large size mat.

Local inhabitants in Assam have learned the craft to deal with the  highly invasive major freshwater weed found in most of the frost-free regions of the world, the water Hyacinth which is detrimental to the aquatic life as it blocks the sunlight,

It has become a source of livelihood for locals as a project started by Meghalaya-based North East Centre for Training and Research (NECTAR) repurposes the invasive plant into weaving yoga mats.

In Guwahati, a large part of Deepor Beel, a Ramsar protected water body, is covered in water hyacinth, but now local inhabitants, mostly women, are employed in using them to weave mats. 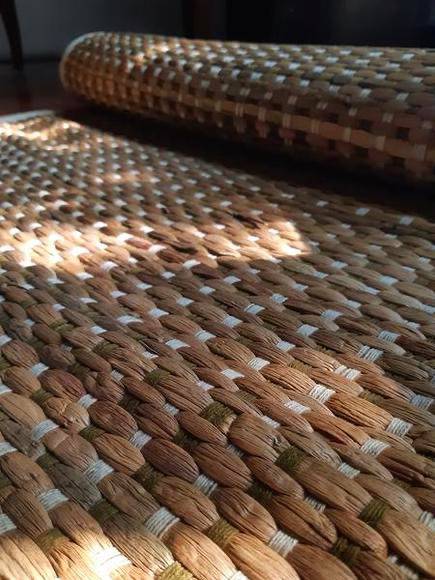 As per, Arun Kumar Sharma, director of NECTAR, Using the water hyacinth for handicrafts is not new to this part of the country.The yoga mat was one of the ideas we came up with and it is doing well as they decided to initiate proper training programmes so that the women could put their weaving skills to better use and have a better source of income.

The brand name “Moorhen Yoga Mats” is given after the birds Moorhen (medium sized water birds) that frequent Deepor Beel. Natural dyes in black, red and green are used to colour the mats.

They are now planning to introduce semi-automatic looms which will enable them to weave more mats in less time. The women have woven approx 1000 mats in the last few months.

Apart from cerating the source of livelihood, the reduced number of water hyacinth in Deepor Beel has lifted the prospect for more migratory birds visiting the lake and consequently the number of tourists who came there for bird watching also came down.