With myriad of traditional motifs like a peacock peeping out of a tree, patterns from temples and henna (mehendi) designs created on the trees, light art innovator Gerry Hofstetter recently commanded the attention of viewers in his maident performance in India, at the Embassy of Switzerland in Delhi.

Viewers were spellbound to observe the eye popping projections conceived and created by light artist, Gerry Hofstetter, who has previously illuminated icebergs, the Colosseum, the Great Pyramids, and Washington Cathedral among many others.Patterns from temples and henna (mehendi) designs were some of the projections showcased at this performance.Having travelled across 87 countries in 30 years, it was still  overwhelming for him to put a show in country so diverse as India.

He was of the opinion that the charm that this land of varied cultures has on many, struck him as well and was sure that India will catch him with its vibrant spirit. It’s the land of light and colours where the culture is more than 5,000 years old. Culture is always the character of the region or the nation, so I knew that here in the garden of the embassy, [we could show] the beautiful animals and mountains as both the nations — India and Switzerland — have very high end art and culture. 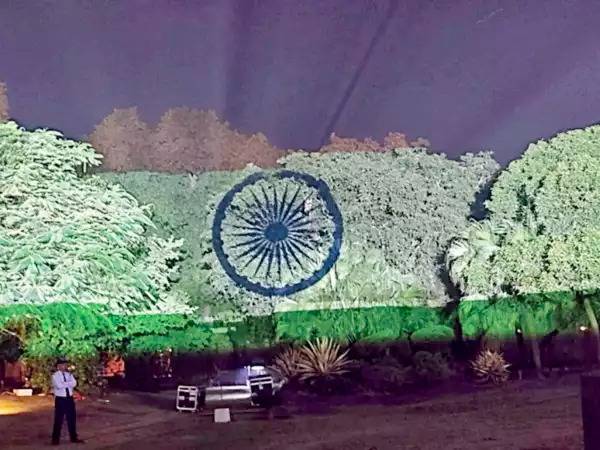 He is planning for a project in India, which will probably come here next year. The pictures for it have been already selected, 19 years ago. 80% of his projections are not visible directly because they are on dangerous high lands — in the high mountains, in minus 30 degrees, in the desert, etc.

Talking about the accusations of causing “light pollution” that he was previously faced with, he clarified, “You see my projections in Nature, along the mountains. I created Tiger on Eiger, which is the largest light art, almost 5.3 kilometers long, on a Swiss peak. It took a year and 22 trials to get right the conditions of the weather, snow, and all they say is that it’s light pollution? My projections are 17 times less than full moon projections by night! And it looks great in the photos because you can get long-time exposure.”

Using light as a communication and mixing it with colours, any person will jump with glee and its effect lingers on as light is an element which is inside us and we cannot deny it. Light, colours, music and love are in fact the four elements that have a language of its own.