Jaipur has no dearth of debonair dens but the new Villa Palladio, a whimsically alluring hotel, conjured up by Swiss Italian Barbara Miolini, artist Vikas Soni and designer Marie-Anne Oudejans leaves you wanting for more.

Driving about 15km eastward from central Jaipur as one gets closer to the thick grove of Sumel village, the buzz besieging city’s newest boutique hotel will command your attention and on reaching the spot the one can’t resist admiring the facade in fascination of its ruby pink aura. Even as the night blankets the surroundings into darkness, Villa Palladio glows like embers in the dark.

Miolini and Oudejans’s stumle upon this gem on a  heart-stopping Safari, it was in a remarkably good state surrounded by thick grovem they loved the simplicity, it felt like a villa in the Italian countryside to them. After having caught their fancy it was destined to be given a new chapter as part of the Palladio family with the help of skilled miniature artist Vikas Soni.

The scarlet chevron stripes of the pool house arcade cast a pleasing reflection on the water—an effect enhanced by the black kota stone on the walls of the swimming pool itself. Even when temperatures in Rajasthan reach their highest the water feels cool because of the colour of that lining. 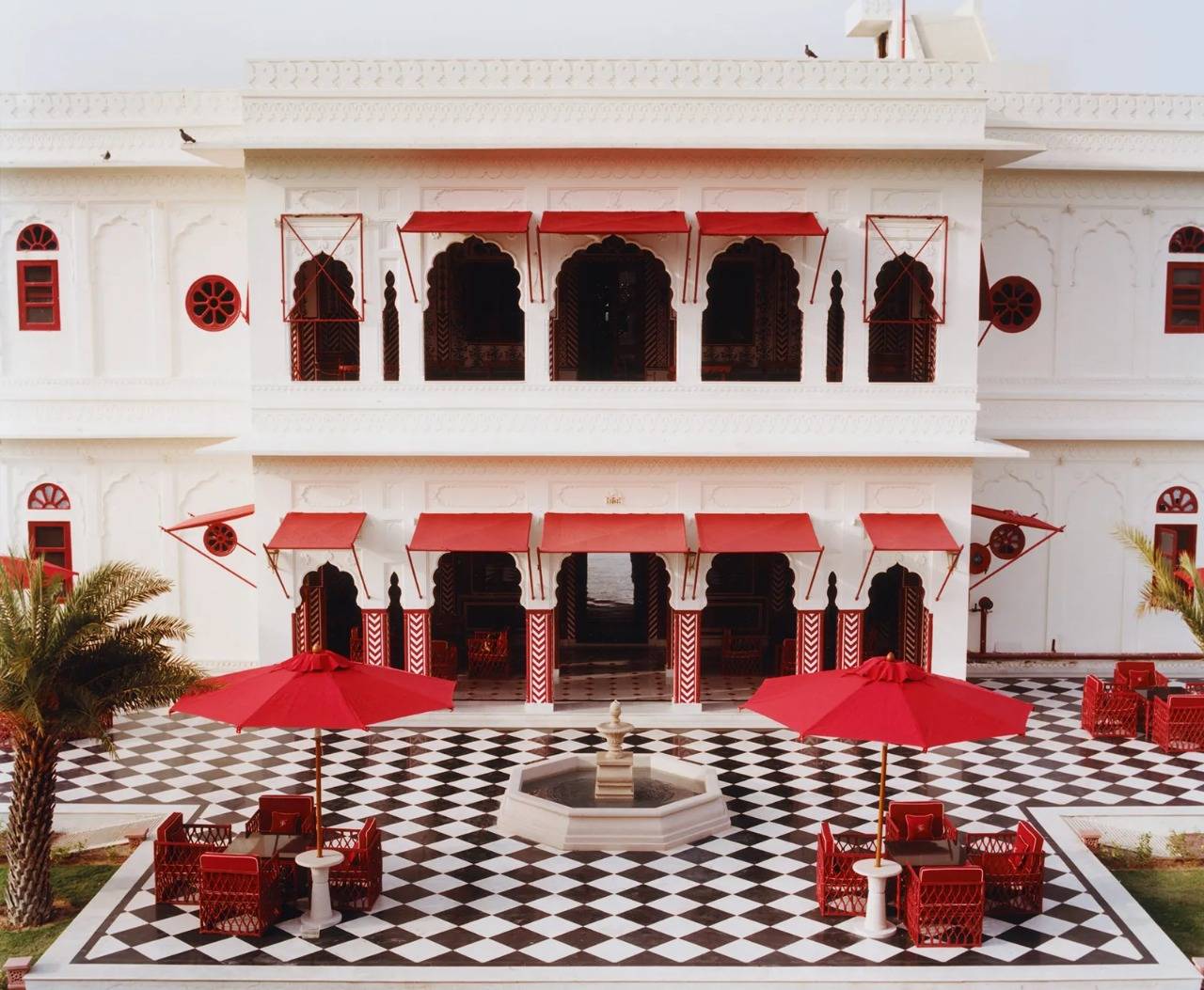 Its foreground arch are artfully hand-painted to evoke, in the owners’ brief, “a garden gate; leaves mixed with Mughal berries with a touch of french mint”. That same motif is carried through to the door surround, dado panels, and cornice.

The shaded entrance veranda looks across to the Aravalli Hills and is furnished with handcrafted cane chairs and tables painted the same wine red as the walls. The lattice pattern is a motif used elsewhere in the hotel, while the Baroque-style brass sconces were made locally.

A black-and-white chequerboard sun terrace anchored by a central sandstone fountain adds theatre to the façade of Villa Palladio. The red window awnings and Italian parasols await guests to navigate them through  royal archways. 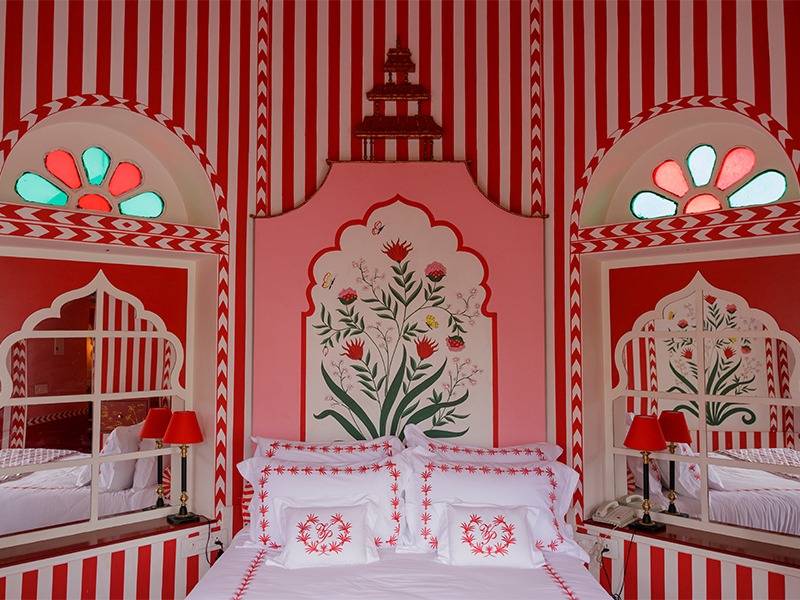 The scalloped tables and hand-block cushions  on the breakfast veranda are designed by Marie-Anne Oudejans.Meals are served on china bearing hand-painted motifs inspired by Mughal miniatures with the enchanting  views of the garden and a mirrored meditation pavilion.

The twin beds with canopies themselves have hand-blocked quilts made in Jaipur; the print is based on a centuries-old Sanganeri pattern from the south of the city.

Entire interior of the sensual Pink Paradise be it the orientalist gold leaf to canopied daybeds, Scarlet-striped corridors lit by black and red sconces, chamber beckoning with a scalloped four-poster flanked by stained-glass arches are meticulously done by the local artisans with the touch of dexterity and wit.